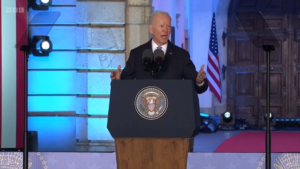 Joe Biden, the man who ‘won’ an election with a record number of votes now has a record low approval rating with just 40% expressing content with his handling of the presidency.

An NBC poll released Sunday revealed that 55 percent of respondents disapprove of Biden’s performance, meaning Biden has seen a 3-percentage-point drop in job approval since January.

“What this poll says is that President Biden and Democrats are headed for a catastrophic election,” Republican pollster Bill McInturff of Public Opinions Strategy, who conducted this survey with Democratic pollster Jeff Horwitt of Hart Research Associates, told NBC News.

The poll also found that 7 out of 10 Americans expressed low confidence in his ability to handle the ongoing conflict between Russia and Ukraine.

A further 8 in 10 say they are worried mishandling of the crisis will lead to NUCLEAR WAR.

The findings come in the wake of Biden blurting out that Vladimir Putin cannot remain in power in Russia during a speech over the weekend.

Administration officials attempted to walk back the comments, with Biden himself later being forced to claim that he didn’t mean he was advocating regime change in Russia.

The Kremlin responded to Biden’s comments with spokesman Dmitry Peskov stating “We will continue to closely monitor the statements by the president of the United States”, adding “We carefully record them and will continue to do so”.

In the past fortnight, Biden has called Putin a ‘war criminal’ and a ‘butcher’.

Biden also refused to rule out a nuclear first strike on Russia, and even told U.S. troops last week that they will likely be sent to Ukraine: