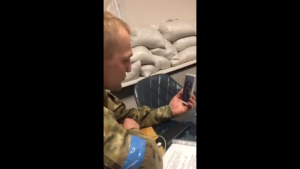 Footage posted to Twitter shows what appears to be Ukrainian soldiers calling up the mothers of dead Russian soldiers killed in action and mocking them over their loss.

A translation of the exchange reveals that the soldier tells the mother “this fucking moron is no more,” informing her that all that was left of him was “his ass and a leg.”

The Ukrainian appeared to be using the phone that belonged to the dead Russian to call his mother.

An alleged neo-nazi Azov Battalion member named Ivan Zaliznyak uploaded the video and five others to his Telegram channel.

The clips hardly do much to bolster the narrative, relentlessly amplified by the legacy media, that the Ukrainians are the ‘good guys’.

Over the weekend, horrific footage emerged of Ukrainian fighters committing literal war crimes by shooting captured Russian soldiers in the knees and watching them die in agony.

However, that doesn’t seem to have deterred the ‘Ukrainian flag in my Twitter bio’ crowd, who seem more hopped up on signaling their virtue than ever before.

Ukrainian soldiers shoot Russian prisoners of war in the legs and afterwards give them a severe beating. At the beginning of the video, there are Russian POWs lying on the ground with bullet wounds in their legs, some of them have got leg bones broken. #WarCrimes pic.twitter.com/t8Wj33X8rv