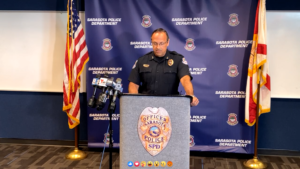 William Devonshire, 52, has been arrested and is facing charges of Murder in connection to the death of Kelliann Ripley, 48, of Sarasota. The family of Ms. Ripley shared with Sarasota Police Department detectives over the weekend they are allowing Ms. Ripley’s name to be released publicly.

“This case was solved using science and technology but it was also solved thanks to the non-stop dedication and hard work of Sarasota Police officers and detectives,” said Sarasota Police Department Interim Chief of Police Rex Troche. “The men and women of our agency sacrificed their nights, weekends, and time away from their families to make sure justice was brought in this case,” said Troche.

On February 25, 2022, Sarasota Police officers responded to a wooded area in the 1100 block of North Tamiami Trail, Sarasota. On February 26, 2022, the 12th District Medical Examiner’s Office determined Ms. Ripley’s death was a result of homicidal violence caused by blunt force trauma and manual strangulation. Evidence collected from Ms. Ripley’s autopsy was submitted to the Florida Department of Law Enforcement (FDLE) for analysis.

On March 15, 2022, Devonshire voluntarily gave a buccal swab to Sarasota Police officers. A buccal swab is a q-tip swab inside a person’s mouth for DNA comparison. Devonshire was arrested on Friday, March 25, 2022, by Sarasota Police Department officers in Pioneer Park, 1260 12th Street, Sarasota, on charges of trespassing, possession of cocaine and possession of paraphernalia.

On Saturday, March 26, 2022, the Florida Department of Law Enforcement (FDLE) contacted the Sarasota Police Department to share Devonshire’s DNA was a match to swabs collected from Ms. Ripley during her autopsy.

Sarasota Police detectives believe Devonshire is a strong suspect in a homicide that happened on March 10, 2022, in the 1900 block of North Tamiami Trail, Sarasota. Sarasota Police detectives are continuing to follow leads in the March 10th homicide. Detectives believe the two homicides are connected because of facts and evidence found in both cases. Detectives are continuing to investigate if the suspect and victims knew one another.

The Sarasota Police Department would like to thank several law enforcement partners who assisted with the investigation including FDLE, the FBI, the State Attorney’s Office of the 12th Judicial Circuit, the Sarasota County Sheriff’s Office, and the Attorney General’s Office.

Devonshire has criminal histories in New Jersey, Maryland, Indiana, Ohio, Delaware, and Florida including charges of assault, aggravated harassment, disorderly contact, battery, burglary, and trespassing. He was charged in 2003 and convicted in 2005 of murder in Delaware. Devonshire is currently being held at the Sarasota County Sheriff’s Office jail on no bond. Booking photos can be found on the Sarasota County Sheriff’s Office website at https://www.sarasotasheriff.org/arrest-reports/index.php