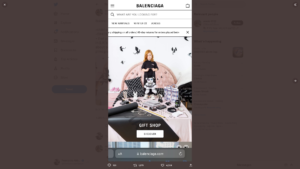 The case struck down a portion of the Child Pornography Prevention Act (CPPA) of 1996, ruling that “virtual” child pornography is protected speech.

In an Instagram post, Balenciaga wrote, “We sincerely apologise for any offense our holiday campaign may have caused. Our plush bear bags should not have been featured with children in this campaign. We have immediately removed the campaign from all platforms.”

The company also claimed ignorance when it came to the Supreme Court case prop, adding that it would be pursuing legal charges against those responsible for featuring it.

Balenciaga severed their ties with @kanyewest due to a tweet.

Yet they expect us to just “accept their apology” after they get caught up sexualizing children?

“We apologise for displaying unsettling documents in our campaign,” the company stated. “We take this matter very seriously and are taking legal action against the parties responsible for creating the set and including unapproved items for our Spring ‘23 campaign photoshoot.”

I thought people were trolling, but nope. It’s real. Maybe this is why Balenciaga left Twitter. They don’t want to be held accountable. Yes, these are children holding teddy bears dressed in bondage outfits. pic.twitter.com/zBlACUiZjo

“We strongly condemn the abuse of children in any form,” the statement continued. “We stand for children safety and well-being.”

Respondents on Twitter expressed their utter disbelief that the campaign, which was part of Balenciaga’s Paris Fashion Week Spring/Summer 2023 collection, was allowed to run.

Pedophiles in the media called the reporting on Balenciaga a “conspiracy theory.”

Meanwhile in reality, Balenciaga is either appalled or pretending to be, as the campaign was real. pic.twitter.com/hF56JcBR9Y

“Frightening how many adults must have been involved in this,” one Twitter user remarked. “Parents, photographers, creative directors, copywriters, design agency staff, producers, managers, advertisers… and not one of them thought, ‘hang on a minute?’”

Balenciaga had previously departed Twitter, presumably in protest against Elon Musk, with critics pointing out that the decision could have been influenced by Musk cracking down on the platform being used to facilitate child exploitation.