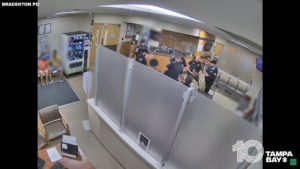 At 2:16 AM on June 22, 2022, Bradenton Police dispatchers received a 911 call from a staff member at Blake Hospital stating that a female in the emergency room was observed on surveillance cameras actively loading a firearm in her purse.

Officers were enroute to the hospital within one minute (2:17 AM), and the first officer arrived on scene by 2:20 AM, entering through an ambulance bay, where the caller was located. The staff member identified the suspect who had been approached by a security guard. Following a brief conversation with the suspect, the security guard seized a handgun from her purse, and BPD officers entered the ambulance bay and emergency room, surrounding the suspect. She was taken from custody and removed without incident by 2:24 AM.

Investigating officers seized a Smith & Wesson Bodyguard .380 handgun, a semi-automatic weapon, with an incorporated laser, which had been secured by the security guard. The suspect’s purse contained one high-capacity (50 round) drum-style magazine with 36 loaded rounds; two magazines containing a total of 13 loaded rounds; and 14 loose rounds.

Additional witnesses stated they observed the suspect loading what appeared to be bullets into a magazine.
Jamekeyra Ulisa Levertt-Chapman, 37, of Sarasota, was arrested and is charged with introducing a firearm into a hospital and possession of a concealed weapon without a concealed weapon permit, which are both felonies. This is an active and ongoing investigation.