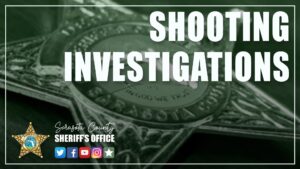 The first incident took place at approximately 11:41 a.m. today in the 2300 block of Britannia Road in Sarasota. Preliminary investigation indicates this is an isolated incident. The shooting occurred inside a residence and resulted in the death of a 47-year-old male. Detectives have identified the suspect in this incident and are actively working to locate him.

The second alleged shooting was reported just after 2:50 p.m., after two individuals arrived at the hospital with gunshot wounds. Based on very preliminary investigation, it is believed an altercation occurred along 32nd Street in Sarasota which led to a shooting. The status of both individuals is unknown at this time however, detectives also believe this incident is isolated. No one is in custody at this time. Additional details will be released as they become available.

Shooting in Sarasota County sends two to the hospital


Man died after a home shooting in Sarasota County

2022-04-09
Previous Post: Scrapyard fire near Port Manatee under investigation
Next Post: Man taken to hospital after hit and run on I-75