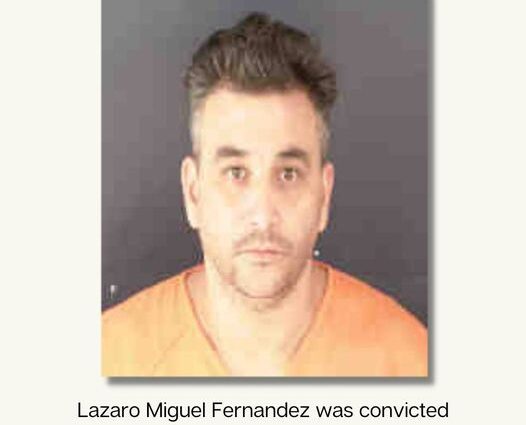 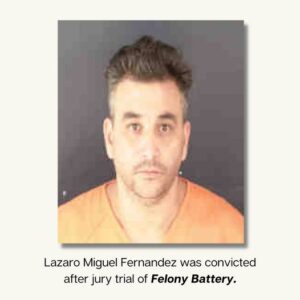 State Attorney Ed Brodsky announced today that Lazaro Miguel Fernandez was convicted after jury trial of Felony Battery. The crime was committed on April 4th, 2019 and investigated by the Sarasota Police Department. The trial was held at the Sarasota County Courthouse on March 29th, 2022. The presiding judge was The Honorable Judge Donna Padar.
The Defendant’s father-in-law was requested by Gator Club employees to leave the premises following a previous verbal altercation a week prior with staff. Once outside of the premises, the Defendant’s father-in-law questioned his removal and began to berate a member of the Gator Club security team. Within seconds of the security member stepping outside of the club to speak with this gentleman at his request, the Defendant immediately struck the security guard from behind and proceeded to strike him six more times while the guard was on the ground. The Victim was treated for a deep laceration to his ear that night at Sarasota Memorial Hospital, requiring 12 stitches.
The crime carries a maximum possible sentence of five years in the Department of Corrections.
Sentencing is scheduled for April 4th, 2022, at 11:00 a.m…
The lead prosecutor in the case, Assistant State Attorney Christopher Hallett commented, “Justice Delayed is not Justice Denied. Although the Jury was asked to go back in time to 2019, they preserved and carried out justice here in 2022.”

2022-04-01
Previous Post: Fauci Flashback: “The Most Potent Vaccination Is Getting Infected Yourself”
Next Post: Man armed with knife killed by deputy during eviction from Sarasota apartment