Reuters ‘Facts Checks’ Biden Being Ignored By Obama And Democrats 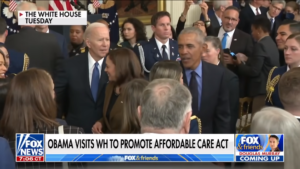 Reuters ‘Facts Checks’ Biden Being Ignored By Obama And Democrats

Reuters has ‘fact checked’ a video from earlier this week when Barack Obama visited the White House, declaring that the footage showing that no one wanted to talk to Biden was ‘taken out of context’.

As we reported, Tucker Carlson and others aired the footage of Biden wandering around on his own as the rest of his handlers and Democratic underlings fawned before Obama.

Carlson described the scene at the White House, noting that “Biden tried to horn in on the conversation swirling around Obama. Everyone involved in that conversation, including Kamala Harris, who supposedly works for Biden, ignored Biden completely.”

He continued, “Biden desperately tried to get Obama’s attention. He puts his hand on Obama’s shoulder. He even calls him “Barack” like they’re friends, but Obama blows him off. He acts like Biden is not even there. Ask yourself if you have ever in your life, seen anything sadder than that?”

Carlson went on to suggest that Democrats are freezing Biden out like a pack of wild dogs that ejects an old weak member in order to survive.

Reuters’ overlords of truth pounced on the incident to run defense for Biden, proclaiming that “social media users circulated a seconds-long clip of the event to claim ‘literally no one wanted to talk to’ President Joe Biden.”

“The scene, however, is missing context: uncropped footage shows he was looking for secretary of the interior Deb Haaland,” Reuters continued.

Reuters provided a longer clip where Biden eventually goes to talk to Haaland.

However, it is clear that he only does that because he is on the outside of the scrum around Obama.

Since when did having the opinion that Biden looks lost need fact checking? What will Reuters fact check next? Perhaps the opinion of a majority of Americans that Biden isn’t doing a great job.

As many have previously pointed out, Reuters’ arbiters of truth have repeatedly failed to disclose conflicts of interest related to much of the content they are presiding over.

2022-04-08
Previous Post: Fauci Says It’s Likely U.S. Will See a Surge in the Fall
Next Post: Babies Struggle to Understand “Basic Facial Expressions” as a Result of Adults Wearing Masks