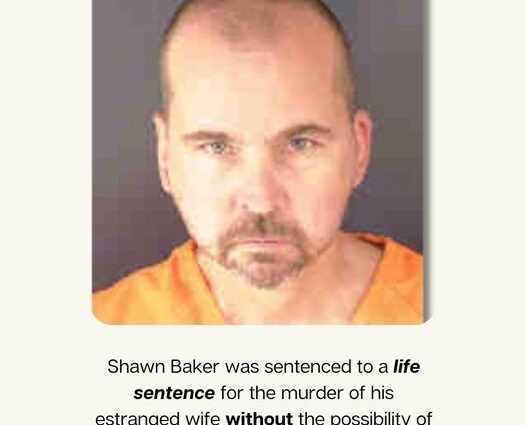 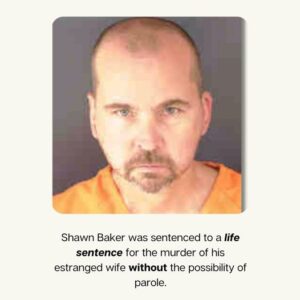 Clarification: When I put in front of children, they were not standing in the bedroom with him as he shot. They were in another room. In my house, the kids can be in the living room and see right in my bedroom. So, it depends on your interpretation of “in front” of them. I personal was outraged with every aspect of the details in this posting, versus outraged over the title having “in front of”. Do you really think that the kids were in another room, therefore they saw nothing and it was not in front of them? 🙂

State Attorney Ed Brodsky announced today that SHAWN BAKER was given a life sentence on the Florida Department of Corrections for the murder of his estranged wife, Kimberly Baker. The homicide was committed on September 30, 2020 and investigated by the North Port Police Department. Detective Christopher Maki was the lead investigator. The sentencing hearing was conducted at the Sarasota County Courthouse on April 4, 2022, by Judge Donna Padar.
The crime carried a maximum possible sentence of life without the possibility of parole.
The minimum mandatory sentence is 25 years in light of the fact the defendant used a firearm in the commission of the homicide.
On the night of September 30, 2020, the Defendant walked into the master bedroom of his North Port home while his wife was on the phone. He shot at her twice, striking her in the head. The couple’s three sons were present in the house and heard the gunshots that killed their mother. When police arrived, the children were locked in a bedroom, fearful for their own safety, not knowing if their mother was dead or alive.
The lead prosecutor in the case, Assistant State Attorney Karen Fraivillig commented,
“Kimberly Baker and the defendant were in the midst of divorce proceedings when Baker shot and killed her. The defendant robbed his children of both a mother and a father by his criminal act. Ms. Baker planned re-settle in Pittsburgh and was murdered just days before her move to begin her new life in Pennsylvania. This is a classic case of: IF I CAN’T HAVE YOU, NEITHER CAN ANYONE ELSE.
Shawn Baker received a just and appropriate sentence for this crime.”