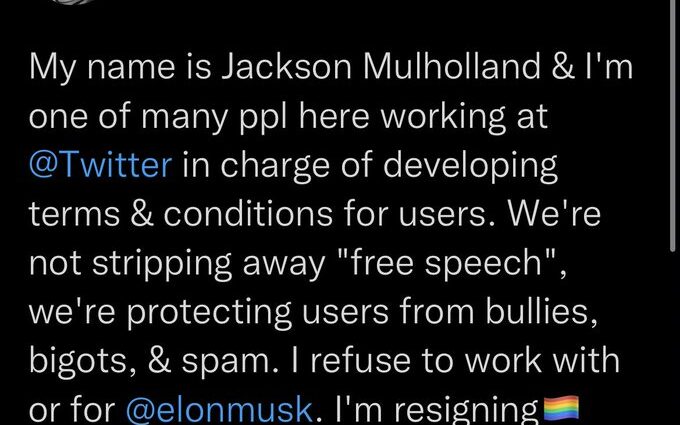 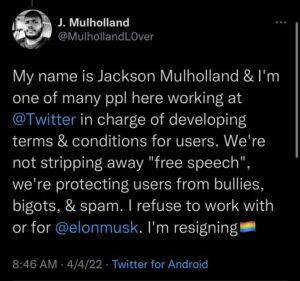 Woke Twitter employees took to the platform Monday to share their anger about Elon Musk buying a controlling stake in the company, following the billionaire’s previous comments about wanting to restore free speech.

Free speech is essential to a functioning democracy.

Do you believe Twitter rigorously adheres to this principle?

Musk has bought 9.2 percent of Twitter shares, meaning he is one of the principle owners of the platform.

Cassie Nick Rumbaugh, a data scientist at Twitter, is among the employees and contractors very upset that @elonmusk is now the largest stakeholder in Twitter.

"A prominent transphobe buying a large stake in Twitter is not at all funny," she says. pic.twitter.com/gFSy52YsTZ

Sharon Davies, a former professional swimmer who has spoken out against Trans women being allowed to compete in women’s events responded:

Others (all with pronouns in their bios) complained about the threat to their precious “company culture”:

"Looks like I picked a good week to be off," reacts Geri Kidd, a recruiting manager for Twitter, to the news that @elonmusk is now the largest stakeholder in the company. pic.twitter.com/OosqOpfq7o

Others noted that they are wealthier because of Musk’s move but they don’t like it:

"And I still dislike him [Elon Musk]."

Haraldur Thorleifsson, who directs creative services for Twitter, states his dislike for @elonmusk after the billionaire became the company's largest stakeholder. pic.twitter.com/lvSSdlTtmY

This is a satirist, but you literally can’t tell the difference:

Others complained that Musk has blocked them, suggesting that somehow that means he’s not really into free speech:

Free speech doesn't mean he has an obligation to listen to you, or anyone else. https://t.co/L76NAwSSer

Others created to-do lists for Musk:

And then there’s this:

2022-04-05
Previous Post: Suncoast: Heroic actions of CCSO deputies caught on dash cam
Next Post: North Port man gets life without a chance of parole for killing his wife in front of their three kids