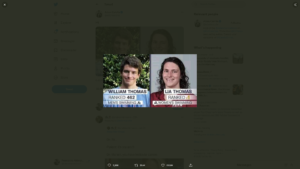 Biological male William “Lia” Thomas trounced his female competition by winning the NCAA Division I championship on behalf of the University of Pennsylvania team at the women’s 500-yard freestyle swimming event on Thursday.

Though the mainstream media lauded 22-year-old Thomas as a “national champion” and a “resilient” transgender athlete, others grounded in reality saw his victory for the farce it was: the disenfranchisement of actual female athletes.

Comedian Adam Carolla simply noted with a graphic on Twitter how Thomas went from a national ranking of 462 in men’s swimming to becoming number 1 in the women’s category.

Others were quick to pile on against the absurdity of a man dominating his female competition in a competitive event reserved for women.

Imagine being the dad in that crowd… “that’s my girl!” pic.twitter.com/IuV6Lq1x6u

This is a kick in the teeth to all women competing… pic.twitter.com/dnU2n6kZkQ

Fuck it, I identify as a child, let me go compete in a Youth Basketball Tournament. I’m about to crush all these little mfers dreams.

Another user compared Thomas to Rachel Dolezal, a white Democrat politician who tried to pass herself off as black by claiming she was “trans-racial.”

Even Caitlyn Jenner, a former Olympic champion and self-described transgender woman, criticized the NCAA for allowing Thomas to compete against biological women.

“[Thomas’] playing within the rules. What I’ve said from the beginning [are] the rules aren’t tough enough,” Jenner said on Fox News. “Just being on testosterone depressants for a year or two, whatever the rules are now, they keep changing, obviously, it is not enough.”

Jenner went on to say that Thomas likely deliberately tried to win but not “but too much” so as not to break the women’s world record.

“Lia Thomas just dominated in the pool, and I’m sure she took it quite easily because she did not want to win by too much.”

“I think she was probably taking it very easy in the race because she knew the world was watching, and she’s just going to go fast enough to be able to win the race,” Jenner added.

This upside-down clown world is all part of the globalist transhumanist plan to condition the population to accept even greater absurdities against nature and eventually tyrannies in the future.

2022-03-20
Previous Post: Suncoast:  One person airlifted to the hospital after a serious accident
Next Post: Fauci is back and warning everyone that COVID-19 infection rates likely to increase with the BA.2 subvariant