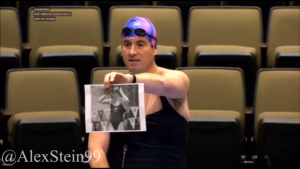 Claiming to be a victim of transphobia, a man in a women’s swimsuit begged the Plano, Texas, City Council to allow him to compete against women, in the latest epic troll by comedian Alex Stein.

In the 3-minute presentation, put on by self-professed transgender woman “Alexandria” Stein, the comedian accuses the city council of being too close-minded, and urges them to join him/her in the fight for women’s rights.

“I’m currently being restricted from swimming in the City of Plano swim league against the women, even though it’s clear that I reassigned my gender last week,” Stein told council members, claiming UPenn swimmer Lia Thomas was his/her hero.

“Like, for example, do I look like a man? Obviously I’m not. This is a woman, but they’re not going to let me swim and compete against the ladies because of transphobia. So what I need you guys to do is I need you to wake up.”

“Clearly, I look like a biological woman. It’s been hours tucking this thing in,” Stein later said.

Evidently the troll was too powerful, as Twitter immediately slapped the video with a “sensitive content” warning, which is ironic considering the platform allows pornographic material.

Stein’s brand of comedic activism has grown highly popular on social media for its effective satirization of liberal insanity.

Last week, the comedian trolled the Richardson, Texas, City Council to support Ukraine by enlisting in the war against Vladimir Putin’s Russian forces.

Stein found his first viral success with a troll of the Dallas City Council, where he sang a freestyle rap facetiously supporting Covid vaccines.

Impossible to describe this scene from Dallas City Council this morning but I’m begging you to click, you will not regret it pic.twitter.com/aQNfXeNZzf

2022-03-29
Previous Post: Kremlin Warns Biden’s ‘Emotional’ Rhetoric Could Lead To “Something Irreparable & Dangerous” For Whole World
Next Post: Help ID two individuals that took off with an Iphone that was left behind