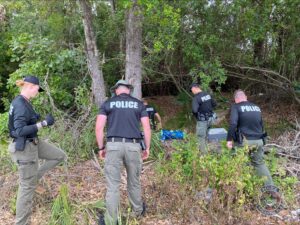 This week, Sarasota Police detectives and officers have worked diligently and tirelessly to collect evidence, speak with possible witnesses, and follow up on dozens of tips and leads that have been received.  On Wednesday, March 15, 2022, the Sarasota Police Department Emergency Response Team (ERT) was activated to search for evidence not far from the North Tamiami Trail corridor.

The City of Sarasota Homeless Outreach Team, which is comprised of case managers and Sarasota Police officers, has been conducting increased patrols and outreach throughout the community to offer services to those individuals who are interested.  Citizens interested in receiving services can contact the Homeless Outreach Team at 941-374-2404 or 941-387-5744.  The Sarasota Police Department Community Action Team and officers with the Patrol Division continue to reallocate resources throughout the City of Sarasota, including the North Tamiami Trail corridor.

“We want to remind our community, especially those who may be in between housing or are unhoused, they need to remain vigilant,” said Interim Chief Rex Troche.  “Until we’ve made arrests in these cases, this remains a top priority for our agency.  We want citizens to remain vigilant and always be aware of their surroundings,” said Troche.

The Sarasota Police Department continues to encourage residents and visitors to call law enforcement immediately if something seems suspicious or out of the ordinary.  Anyone with information on this case is asked to call the Sarasota Police Department Criminal Investigations Division at 941-263-6070 or leave an anonymous tip with Crime Stoppers by calling 941-366-TIPS or online at www.sarasotacrimestoppers.com