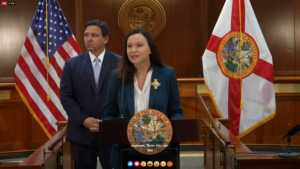 “Florida has led the nation in standing up to misguided federal government policies and fighting back against heavy-handed mandates that have no scientific backing,” said Governor Ron DeSantis. “If politicians and celebrities can attend the Super Bowl unmasked, every U.S. citizen should have the right to fly unmasked. It is well past time to get rid of this unnecessary mandate and get back to normal life.”

“President Biden’s shortsighted, heavy-handed and unlawful travel policies are frustrating travelers and causing chaos on public transportation,” said Attorney General Ashley Moody. “It’s long past time to alleviate some of the pressure on travelers and those working in the travel industry by immediately ending Biden’s unlawful public transportation mandates. I’m proud to stand with Governor DeSantis and to lead my fellow Attorneys General in this multistate action to end the forced masking of travelers in the U.S.”

The current CDC order, which has been in place for over a year, was set to expire on March 18. The Biden Administration chose to extend the order until April 18, despite the lack of high-quality data to support the efficacy of mask mandates, case numbers and hospitalizations experiencing a large downward trend, and 81.7% of the population having received at least one dose of the COVID-19 vaccine.

The complaint seeks to end the unlawful mask mandate on public transportation and establish a permanent injunction against enforcement of the mandate.

Gov. DeSantis announces a lawsuit against the Biden Administration’s continuation of the transportation mask mandate. https://t.co/tiu5F1NaGA