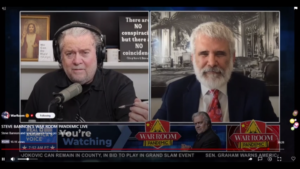 Dr. Robert Malone, the inventor of mRNA vaccines, made an appearance on Steve Bannon’s War Room where he warned about an “Ebola-like hemorrhagic fever” super virus coming out of Communist China that he believes could be caused by mutations arising from mass vaccination.

The inventor of modern mRNA vaccines, Dr. Robert Malone, went on Steve Bannon’s War Room where he warned of a new disease spreading across Communist China that appears to be an “Ebola-like hemorrhagic fever” super virus.

Dr. Malone explained that “vaccinating into a pandemic will drive the development of escape mutants that are resistant to vaccination,” adding that the Chinese Communist Party’s (CCP) mass vaccination campaign “has mirrored that of the western world, and has resulted in a perfect storm of environment for developing a super virus.”