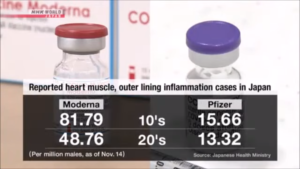 The Health Ministry of Japan has listed heart inflammation as a possible side effect of taking the Pfizer or Moderna COVID injections.

The government’s Ministry of Health, Labour and Welfare claimed that as of November 14, out of every million males who took the Moderna vaccine, inflammation of the heart and its outer lining were reported in 82 males aged 10 to 19 and 49 males in their 20s.

The ministry recommended during a meeting last week to put a disclaimer warning of “serious side effects” on the documents attached to the vaccines.

The government agency will also allegedly require hospitals to report in detail incidents involving people who developed inflammation symptoms within 28 days after receiving the injection.

Japan had halted the use of 2.6 million Moderna vaccine doses in August following reports they were contaminated with “tiny metal flakes” that “react to magnets.”

Though several people died in Japan as a result of the contaminated Moderna batch, Japan resumed the distribution of Moderna shots days later.

2021-12-09
Previous Post: Tipping during the holidays: How much should you give?
Next Post: Americans Should Require Christmas Guests To Prove They’re Vaccinated, Says Fauci