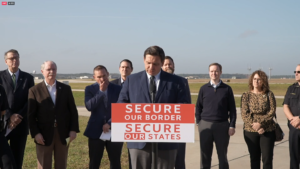 JACKSONVILLE, Fla. — Today, Governor Ron DeSantis was joined by Congressman John Rutherford, Jacksonville Mayor Lenny Curry, Jacksonville Sheriff Mike Williams, and Public Safety Czar Larry Keefe to announce new proposals to fight illegal immigration and protect Floridians from the Biden Border Crisis. Governor DeSantis announced proposals for the upcoming legislative session to hold accountable private entities that knowingly or recklessly assist the Biden Administration in resettling illegal immigrants into Florida. The legislation would also strengthen E-verify enforcement and codify and build upon the steps he has taken to protect the state of Florida through Executive Order 21-223. Additionally, Governor DeSantis announced that the Department of Children and Families (DCF) published an emergency rule to prohibit the issuance or renewal of any license to house unaccompanied alien minors who seek to be resettled in Florida unless there is a cooperative agreement between the state and federal government. A one pager on the proposal and the DCF rule can be found here.

“This crisis at the southern border is not the result of a failed policy from the Biden Administration — it is their policy,” said Congressman John Rutherford. “The decision to move illegal immigrants into Jacksonville threatens the lives of folks here in Northeast Florida. Enough is enough. I’m thankful that Governor DeSantis is putting the safety of Floridians first and is fighting back against the Biden open border agenda.”

“I’d like to thank Governor DeSantis for continuing to advocate for a safer and more secure Florida. I also stand with him and support this proposed legislation,” said Mayor Lenny Curry. “Like the Governor, I want more information about who is on these flights, and how these individuals are being vetted and screened. This is not about vilification. It’s about verification.”

“I am grateful that the Governor has not wavered in his efforts to keep Florida safe and in his support for those men and women on the front lines working hard at it every day,” said Jacksonville Sheriff Mike Williams. “I think it is important that the people of Jacksonville and all across our state understand the concerns we are all facing and how it should matter to everyone. If it is our job in law enforcement to keep our communities safe, that job is challenged when we have work with nothing more than the unknown.”

“The Biden administration has continued to ignore its sworn duty to secure our border, to enforce immigration laws, and to protect Florida from illegal immigration,” said Public Safety Czar Larry Keefe. “Governor DeSantis’ proposals announced today will help us shut down the human smuggling pipeline to Florida and deter criminals who put unaccompanied children in harms way for their own gain. Thank you, Governor DeSantis, for leading this fight.”

The legislation proposed today will make clear that the State of Florida will not provide any discretionary benefits to illegal aliens and will also prohibit state and local agencies from doing business with any private entities that facilitate the resettlement of illegal aliens in the state of Florida from the southern border.

Governor DeSantis also announced that DCF published an emergency rule today that prohibits the issuance or renewal of any license to provide services to Unaccompanied Alien Children (UAC) who seek to be resettled in Florida unless resettlement is governed by a cooperative agreement between the State of Florida and the U.S. Government. For UAC already present in the state, the emergency rule requires licensees to conduct regular welfare checks. The DCF emergency rule can be found here.

Today’s announcement builds upon the actions Governor DeSantis has previously taken to protect Floridians from the dangerous impacts of the lack of immigration enforcement by the Biden Administration. On September 28, Governor DeSantis announced actions to address the Biden Border Crisis, including issuing Executive Order 21-223 and the appointment of Larry Keefe as Florida’s Public Safety Czar. Details on this announcement can be found here.

2021-12-10
Previous Post: Martin Hyde tells the Sarasota school board “They’re our kids, not yours”
Next Post: Prices Climb At Fastest Pace Since 1982… But It Could Have Been Worse