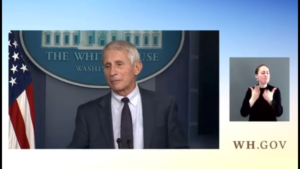 Dr. Anthony Fauci said that “everybody” entering the U.S. will be subject to new COVID testing procedures in the wake of the Omicron variant — except for illegal aliens, of course.

“You advised the president about the possibility of new testing requirements for people coming in to this country, does that include everybody?” Doocy asked.

Fauci replied, “The answer is yes. Because you know that the new regulation…is that anybody and everybody who’s coming into the country needs to get a test within 24 hours of getting on the plane to come here.”

Doocy: “You advised the president about the possibility of new testing requirements for people coming in to this country, does that include everybody?”

Fauci: “The answer is yes.”

Doocy: “What about … these border crossers?”

Doocy then asked if those rules would apply to illegal aliens pouring in from the southern border.

“What about people who don’t take a plane, and just these border crossers coming in in huge numbers?” he asked.

So, everybody in the world coming into the country will have to get tested for Omicron with the exception of tens of thousands of people entering the U.S. illegally.

If Biden and Fauci truly believed in the logic of their COVID policies, the illegal aliens would also be getting tested and the National Guard would be tightly regulating the southern border.

But the opposite is happening, because it’s not about public health.

2021-12-02
Previous Post: What Do They Know? Insiders Are Dumping Stocks At A Pace Never Seen Before In All Of U.S. History
Next Post: Florida considers teaching risks, benefits of social media