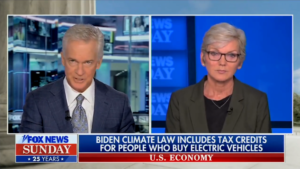 Once again showing how completely out of touch with reality they are, the Biden Administration’s Energy Secretary has suggested that Americans facing hardship as the cost of living spirals should buy solar panels.

“If you are low income, you can get your home entirely weatherized through the expansion from the bipartisan infrastructure laws, a significant expansion — you don’t have to pay for anything,” she claimed, adding, “”If you want heat pumps, insulation, new windows, that is covered.”

She then advised lower middle class Americans to take out credit to get solar panels.

“If you are moderate income, today you can get 30% off the price of solar panels. Those solar panels can be financed, so you don’t have to have the big outlay at the front,” Granholm stated.

She continued, “If you don’t qualify for the weatherization program, you will be able to, starting next year, get rebates on the appliances and equipment that will help you reduce your monthly energy bill by up to 30%. That is all about reducing costs for people.”

The comments come after months of Granholm and other minions touting electric cars, which cost over 60 grand.

The backlash was swift:

GOP just needs to run ad after ad of Granholm telling the poors to buy solar panels and electric cars to save money. https://t.co/oAdXKutrBi

They don't know how they sound, because everything they read and everyone they know just echo their ideology back at them – except turned up in volume, higher in pitch, and with applause. https://t.co/kniDhNR4WB

If you’re poor, Tim Ryan will give you 30 percent off the price of solar panels. They won’t keep you warm this winter but they are made in China, so there’s that. https://t.co/UatdBWSu9p

An underrated aspect of the Biden admin unpopularity is just how terribly his cabinet has performed at messaging – Becerra, Mayorkas, Granholm, Buttigieg, Garland, Yellen all drags. When your best performer is Tony Blinken you have a problem. https://t.co/i0Du46TXPQ

Perfect of example about how Democrats don’t care about rising costs, only their Green New Deal.

Food is rising at the fastest pace since 1979 and Biden’s response is to push you to buy solar panels. https://t.co/TqSJKVKMu4