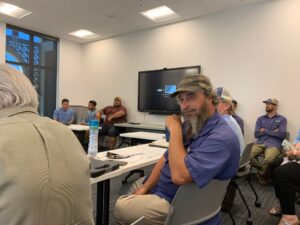 A few weeks ago, I was asked by a City of Venice employee to attend their contract negotiations between the union and city.  I assumed that it was not going well and they wanted some coverage.  So, I attended the third of three that took place today.

According to Dan Tucci the local union President, there normally are not a lot of employees that attend the negotiations.  However, today it was standing room only.  I later found out that there were several employees there because of concern with how the negotiations were going.  One of the issues revolved around a comment that employees state the HR Director (Alan) made during one of the meetings.  A comment that led to a couple employees in the public utilities department to leave their employment with the city.  From what I can gather, an employee was comparing the City of Venice to other cities when it comes to salaries.  The employees state that Alan told them to go work there then.  Alan states he did not make that comment and believes if he said anything it would have been along the line that it is a free market and employees can leave Venice and work elsewhere if they are not happy with the pay.  Either way it sparked a lot of outrage and I believe emotions are running high right now.  At one point and employee stood up facing Alan and lost it on him, basically stating that he will not stay there and listen to his bs and then he stormed out of the meeting.

The union is asking for a lot because they believe a lot is needed to get the employee wages up to a level that is in line with inflation and that will allow them an acceptable standard of living. I did talk to Alan after his meeting with the union and he told me that a fair offer was presented to the union.  I asked Tucci about the offer and he said that the offer was lacking, but he would present it to the union and get direction from the employees.  More than likely the union will not be putting it up for a vote and instead they will counter the cities offer during their next meeting in September.  Both parties hope they will not come to an impasse.   Certain actions appear to upset the employee’s, like the city attorney saying something along the lines that he hopes there is no emergency issue today, which I believe was made because all the employees that were at this meeting.  Tucci noted that none of them were on the clock and they were there on their own time.  Tucci later text me and said that Alan sent out an email asking the supervisors to confirm that all the employees at the meeting were indeed not on the clock.  He said actions like this are concerning to employees.

The union did talk about the council, which needs to approve the terms that the city and union come to.  I asked if council members were allowed in the meeting and Tucci told me they are, since it is a public meeting.  However, they do not attend.  He believes that it is over the concern that if it comes to an impasse and when this occurs, the council must get involved and they do not want carry any bias that they may have picked up from the meetings.  He did note a concern that the HR Director does not effectively communicate everything to the council members.   Often the meeting coverage is presented by the HR Director to the council, they feel the information is often presented through a filter.   I am sure the HR Director would disagree with this and state that he completely communicates the essential information to the council.  The union members believe that the council is clueless when it comes to the issue the employees are facing and wish they were more involved, versus just being involved when it comes to voting on the terms that the city and union have reached.

One of the largest concerns is the salaries and the impact that they are having on the employee’s quality of life.  They noted how inflation has taken an impact from food to electric.  The union noted that no city employees live within the city because they can not afford the rent or the price of a home within the city limits.  Even outside of the city limits, it is hard to make ends meet, when rent eats up over 50% of their monthly income.  The union noted that their request may seem like a lot, but their request basically aligns them with neighboring cities like North Port and keeps pace with the increased cost that are associated with inflation.   An employee saw my posting I put out today, which illustrates that the City of Venice millage rate is .90% higher than North Port.  He asked me why is that Venice takes in so much more in property tax on a per house basis, yet pays their city employees so much less.

Talking with individuals prior to the HR Director and his attorney arriving, I definitely got a sense that the employees are not happy.  They are not happy with the salaries and the perceived lack of appreciation for their work.  Three employees have recently left the city for jobs that pay better and the concern is that many more may leave the city, if the negotiations do not result in better pay from the city.  Then city residents have to wonder how this will impact our services, if so, many employees start to leave their employment with the city and they start to bring in more inexperienced employees.  Essentially creating a revolving door.

We shall see how it all turns out, with the next meeting scheduled to take place in September.  I believe they are hoping to have a deal between the union and city employees by October 1.

Disclosure:  I did drop my paper work to run for mayor today, but it will not be finalized until I give the city a check on Friday.  This meeting was planned a few weeks ago, when an employee asked me to attend one of two meetings.  At that time, I was not planning on running, thinking that Feinsod was going to run again.

2022-08-24
Previous Post: “Tsunami Of Shutoffs”: 20 Million US Homes Are Behind On Power Bills
Next Post: $25 million of ARPA will go to affordable housing in Sarasota County