Top Economist: “We’re About to Abandon Traditional System of Money & Replace It With Digital Blockchain” 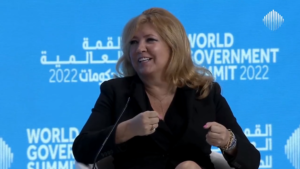 Top Economist: “We’re About to Abandon Traditional System of Money & Replace It With Digital Blockchain”

Discussing a new digital age where every single financial transaction will be documented on the blockchain, economist Pippa Malmgren told attendees of the World Government Summit 2022 that the age of the Central Bank Digital Coin, or CBDC, is upon us.

“What underpins the world order is always the financial system,” Malmgren said, explaining she grew up with a fundamental understanding of the role monetary systems in our everyday lives.

New World Order: “We are on the brink of a dramatic change; we are about to abandon the traditional system of money and replace it with a new one, Digital Blockchain CBDC, which will give us greater clarity over every single transaction.” – Pippa Malmagren.#WGS2022 pic.twitter.com/XChgfs6MVF

“I was very privileged. My father was the adviser to Nixon when we came off the gold standard in ’71, and so I was brought up with a kind of inside view of how very important the financial structure is to absolutely everything else,” Malmgren said.

“And what we’re seeing in the world today is I think we are on the brink of a dramatic change where we are about to – and I’ll say this boldly – we’re about to abandon the traditional system of money and accounting and introduce a new one, and the new one – the new accounting – is what we call blockchain.”

“It means digital,” she continued. “It means having an almost perfect record of every single transaction that happens in the economy, which will give us far greater clarity over what’s going on.”

Of course, governments having the power to observe a person’s transactions could also enable the government to control what, or whether, a person can, or can’t buy.

Malmgren warned a digital economy threatens to disrupt the balance of power for fellow globalists and the plebs they lord over, but professed to desire a Digital Constitution of Human Rights in order to protect the rights of citizens.

The revealing comments were just one of many alarming statements made by top globalists at the conference held in Dubai over the past two days, which was commenced by CNN’s Becky Anderson who kicked off the summit by asking, “Are we ready for a New World Order?”

Omg the New World Order is a right wing conspiracy theory… um. Wait. Well I guess they’re saying it out loud now. The time between some thing being called a conspiracy theory and it coming out as 100% accurate is shrinking drastically. https://t.co/H5m7GmifYf

Taking action here and now to shape an inclusive and prosperous future for humanity and the planet at the #WorldGovSummit pic.twitter.com/VtqpcGIjZL

Indeed, while the establishment mocks and ridicules so-called conspiracy theorists for sounding the alarm about the New World Order, globalists are openly configuring in real time how the new system will operate.

2022-04-01
Previous Post: Sarasota County Arrest Report For 4.1.22
Next Post: Suncoast: Deputies executed a search warrant which led to the arrest of four individuals