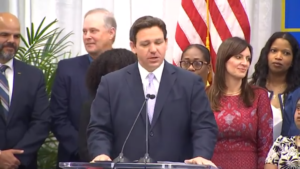 Speaking at a Miami press conference on Tuesday, DeSantis railed against blue cities like Philadelphia for reimposing mask mandates amid a supposed uptick of COVID cases, noting that Democrat politicians typically ignore their own policies and flee to places like Florida to escape them.

“You just saw Philadelphia impose an indoor [mask] mandate. You’re going to potentially have some of these deep blue jurisdictions go back to restrictions and mandates,” DeSantis explained, adding that Shanghai is also experiencing a “brutal lockdown.”

DESANTIS: “If I had a dollar for every lockdown politician that escaped their own policies to come to our free state, I would be set for life.”
pic.twitter.com/xq5mjasWmd

“As long I as sit in the chair in which I sit, no Floridian will be restricted, mandated, or locked down in any possible way,” he added as the crowd erupted in applause.

DeSantis broke down how Democrats use mandates and lockdowns as “COVID theater” rather than sensible public health policy, evidenced by their tendency to flout their own rules.

And so when you see some of these folks that want to impose that, and let’s be clear, you look over the last two years, there’s a cottage industry that was developed of lockdown politicians and media personalities who would either impose or support lockdown policies in their jurisdictions or advocated on their TV shows, criticize Florida mercilessly and then the first chance they get to get out from under the yoke of those bad policies, you see them in Miami or Palm Beach or all these other places.

“And if I had a dollar for every lockdown politician that escaped their own policies to come to our free state, I would be set for life. That’s just a fact,” he added.

DeSantis went on explain that the real issue isn’t the well-documented Democrat hypocrisy, it’s that Democrats don’t truly believe in their own COVID policies.

“Some people will say ‘oh they’re hypocrites’ and all this stuff. Yeah they are, but that’s not the issue,” he said. “The issue is, if they thought their policies really were necessary and these mitigations really were effective, they would be abiding by it. They’re not abiding by it because they know it’s all about politics and control.”

“I will say that if it weren’t for our leadership, we would’ve had kids locked out of school for a year throughout this state, we would’ve had hundreds of thousands of people tossed out of work. We would’ve had small businesses and family-owned business that would’ve collapsed. And instead of that, we weren’t locking those people down, we were lifting them up, and that was the right thing to do,” he concluded.

A recent study by the Committee To Unleash Prosperity supports DeSantis’ claims, showing that Florida was among the best-performing states in the country in terms of deaths, the economy, and education.

“Shutting down their economies and schools was by far the biggest mistake governors and state officials made during COVID, particularly in blue states,” author of the study Stephen Moore said Monday.

Fox News: “Blue states getting a failing grade when it came to their response on the COVID pandemic.”

The Wall Street Journal broke down the data further:

The study ranks Florida 28th in mortality, in the middle off the pack and about the same as California, which ranks 27th despite its far more stringent lockdowns and school closures. But Florida ranks third for the least education loss and 13th in economic performance. California ranks 47th overall because its shutdowns crushed the economy (40th) and in-person school (50th).

In other words, Florida did about average on mortality as other states, but it did far better in protecting its citizens from severe economic harm and its children from lost schooling. “The correlation between health and economy scores is essentially zero,” say the authors, “which suggests that states that withdrew the most from economic activity did not significantly improve health by doing so.”