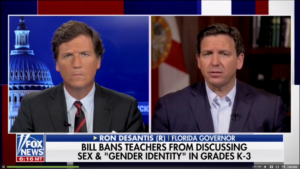 Florida governor Ron DeSantis openly accused Disney of being obsessed with sexualising children Tuesday, questioning why the company is choosing “the hill to die on” as having “transgenderism injected into kindergarten classrooms.”

Appearing on Tucker Carlson’s show, DeSantis was reacting to Disney’s public rebuke of his “Parents Rights in Education” bill which prevents children as young as kindergarten age being taught about transgender and gay sex issues in schools.

“For a company like Disney to say this bill should have never passed, first of all they weren’t saying anything when this was going through the House,” DeSantis asserted.

He continued, “They only started doing this because the woke mob came after them.”

“Why is the hill to die on to have transgenderism injected into kindergarten classrooms or woke gender ideology injected into second grade classrooms?” the governor questioned.

Carlson charged that Disney has a “fixation on the sexuality of children” pointing to recent reports that four employees of the media giant were charged with human trafficking in Florida, with one having allegedly sent sexually explicit texts to an law enforcement agent posing as a teenage child.

Referring to Disney’s active presence in China, DeSantis quipped that “if we had done a bill that prohibited talking about the abuse of Uyghurs in China, Disney would have supported that legislation because they won’t say a word about that.”

“They’re fine lining their pockets from the CCP and all the atrocities that go on there, but it’s those kindergarteners in Florida that they really want to have transgenderism as part of their core curriculum in school,” DeSantis added.

The governor also noted that Disney seems perfectly fine with running cruises to the island of Dominica, where homosexuality is criminalized.

DeSantis also commented on the attempt to frame his legislation as anti-gay by labelling it the “don’t say gay bill”.

“It’s not even used in the bill, it’s a fake narrative, it’s a lie. They have to lie because if they admitted to what they were really for, sexualizing kindergarteners and first graders, they know that would not fly with the public,” he urged.

2022-03-30
Previous Post: The Ruble, The Dollar And The Price Of Gold – Who Is Really Winning The Economic Chess Game?
Next Post: Fauci Says We’ll Never Know If Covid Restrictions Really Worked, Admits Lockdowns Had “Negative Consequences”