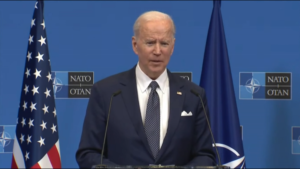 President Joe Biden warned Americans to expect food shortages in the future, citing the Russia-Ukraine war and the sanctions imposed by Western nations as the reason.

The president gave his warning during a press conference at NATO headquarters in Brussels Thursday after being asked about growing food concerns related to fertilizer and wheat from the region.

“The price of the sanctions is not just imposed upon Russia. It’s imposed upon an awful lot of countries as well. Including European countries and our country as well,” continued Biden. “And because both Russia and Ukraine have been the breadbasket of Europe in terms of wheat, for example, just give one example.”

“But we had a long discussion in the G7 with the, with both the United States, which has a significant third-largest producer of wheat in the world, as well as Canada, which is also a major, major producer.”

Biden went on to say what America and her “European friends” had planned for the incoming crisis:

“And we both talked about how we could increase and disseminate more rapidly, food shortages. In addition to that, we talked about urging all European countries and everyone else to end trade restrictions on sending, limitations on sending food abroad.

And so we are in the process of working out with our European friends, what it would be, what it would take to help alleviate the concerns relative to food shortages. We also talked about a significant major US investment, among others, in terms of providing for, the need for humanitarian assistance, including food as we move forward.”

Biden’s remarks come at the heels of multiple economic crises gripping Americans, including having to deal with surging gas prices.

2022-03-25
Previous Post: The Skyrocketing Price Of Fertilizer Has Caused A Worldwide Nightmare That Global Leaders Can No Longer Deny
Next Post: Florida embraces its growing crypto-friendly reputation