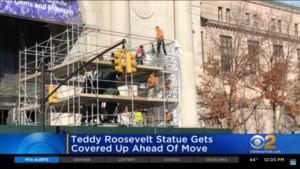 Yet another statue of a former US President has been deemed ‘racist’ and was covered up with a tarp Monday, ready to be removed altogether from the MUSEUM where it has stood since 1940.

The statue depicts Theodore Roosevelt, the 26th president of the United States on horseback.

Earlier in the year, the American Museum of Natural History in New York, decided that because the statue has a Native American and black man walking alongside Roosevelt, it could be construed as representing a “racial hierarchy,” and it should be removed and archived.

So sad to go by the Museum of Natural History today and see the statue of Teddy Roosevelt all covered up.

We need icons like Teddy to inspire the next generation of trust-busters and populists. Tearing this statue down and erasing his image is a damn shame. pic.twitter.com/P3aNNP9gil

NYC's Museum of Natural History hides controversial Roosevelt statue https://t.co/t1MrUrsBki via @MailOnline 🤷‍♂️What good is a History Museum if they cover one of the great President’s? I hope their donations,and big donor’s dry up! NYC sucks, and I will never spend a dime there!

@GOP Why don’t you utter a word about militant losers taking it upon themselves to remove T. Roosevelt statue in NYC?
1. Born in NYC.
2. Youngest to become POTUS.
3. 1st to dine with black in W. House,Booker T. Washington.
4. 1st to protect environment.
5. 1st Food Purity Laws.

The statue will be on ‘indefinite loan’ to the Theodore Roosevelt Presidential Library in Medora, North Dakota, which is not scheduled to open until 2026.

In a previous statement, the New York museum said “The statue was meant to celebrate Theodore Roosevelt (1858-1919) as a devoted naturalist and author of works on natural history. Roosevelt’s father was one of the Museum’s founders, and the Museum is proud of its historic association with the Roosevelt family.”

“At the same time, the statue itself communicates a racial hierarchy that the Museum and members of the public have long found disturbing.” the statement continues.

Called it. Now the statues can't even be part of museums. https://t.co/SXs5toe4Vw

The move appears to have been spurred by a previous incident in 2017, when protesters smeared “blood” on the statue and published a statement calling for its removal as an emblem of “patriarchy, white supremacy and settler-colonialism.”

Fake blood discovered on base of statue of Theodore Roosevelt this morning outside @AMNH. #NYPD says this happened between 4 and 7am. pic.twitter.com/6o4S6gf5uP

The decision seems bizarre, given that the museum made a point of saying it feels there is no problem with Roosevelt in general, just the statue.

The museum also announced that it will rename its Hall of Biodiversity after Roosevelt as a nod to the former president’s work as a conservationist.

There has been a general attempt by leftist protesters to paint up Roosevelt as a white supremacist who believed in eugenics.

We used to be a country. A proper country. pic.twitter.com/l63hQayyeD

The removal of the Roosevelt Statue comes on the heels of a statue of Thomas Jefferson that stood for almost 200 years being removed from New York City Hall after a minority of Mayoral appointees deemed it to be potentially offensive.

The statue was stuffed into a crate and lowered down to the ground floor of the building before being taken away to be mothballed because… ‘racism’.

A statue of Thomas Jefferson, who was the third president of the United States, has been removed from New York City Hall after a unanimous vote by a committee, because of his links to the slave trade.