Video: Maskless Karen Assaults Passenger For Not Wearing Mask on Delta Flight From Tampa To Atlanta 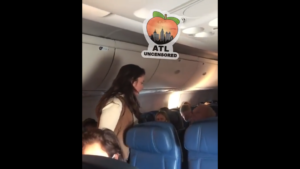 Video: Maskless Karen Assaults Passenger For Not Wearing Mask on Delta Flight From Tampa To Atlanta

Shocking video from a Delta flight shows a furious woman chastising a fellow passenger for not wearing a mask.

Except, the woman wasn’t wearing her mask either.

The footage shows the Karen shouting at a man behind her for not wearing a mask, then hitting him when he responded: “You put your mask on, bitch!”

A flight attendant tried separating the angry woman and the seated passenger as the maskless woman again shouted, “Put your mask on!”

The man replied: “Put yours on, bitch!”

“I won’t put my mask on!” the angry pro-mask woman said.

The incident took place on a stint from Tampa, Florida, to Atlanta, Georgia.