Fauci Swipes At Tucker: ‘Triggers Some Of The Crazies In Society’ 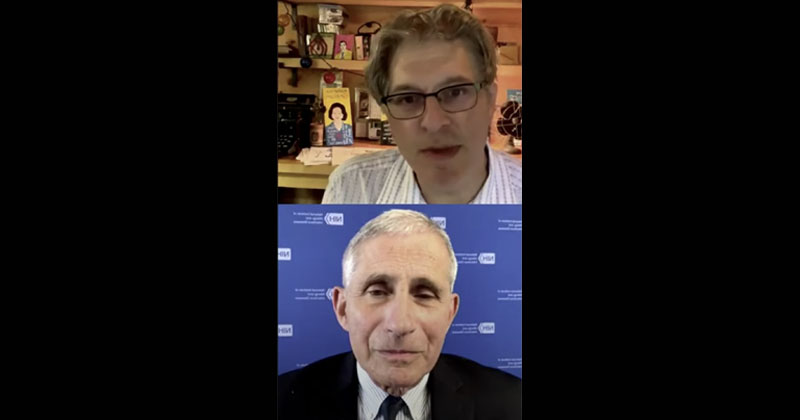 FAUCI SWIPES AT TUCKER: ‘TRIGGERS SOME OF THE CRAZIES IN SOCIETY’

The National Institute of Health Director Dr. Anthony Fauci criticized host Tucker Carlson during an interview on Friday, arguing that the Fox News host’s coronavirus coverage has “triggered the crazies in society” who are hesitant to follow his public safety guidances.

In an appearance on an Instagram livestream of “Stuck With Geoff”, Fauci defended his flip-flop advice to the American people following weeks of criticism by Carlson as the pandemic has unfolded.

“I flip around the channels at night, which I probably shouldn’t, and I find this guy – you know this guy, Tucker Carlson, heard of him?” The Post’s Geoff Edgers asked Fauci.

“Yeah, he’s the guy that really loves me,” Fauci said with a smile.

Edgars then asked Fauci if Tucker’s frequent criticisms of him makes him feel “threatened or concerned,” to which Fauci replied that he feels Tucker compels his viewers to threaten him.

“Well, I’m not concerned with what he says, I mean I think you could say that when he does that, that triggers some of the crazies in society to start actually threatening me, which actually happens,” Fauci said.

“I mean, who would have thought when I was in medical school doing things to save people’s lives that I’d be going around with a security detail. I mean, that’s really ridiculous.”

Carlson’s show “Tucker Carlson Tonight” has been one of the only evening programs that reported on the coronavirus outbreak even-handedly and factually as the pandemic has unfolded over the months, including pointing out the many inconsistent remarks made by Fauci throughout.

For example, Fauci advised the American people not to wear masks in March.

He also said shaking hands would have to be forbidden forever, that all sports games and schools would have to be shut down indefinitely, to wear a mask before engaging in sexual relations with a stranger via dating apps.

Additionally, he condemned public gatherings of any kind — except the Black Lives Matter riots that have swept across America.

2020-08-16
Previous Post: A new system to keep an eye on out in the Atlantic
Next Post: Suncooast: Manatee starts a new school year today