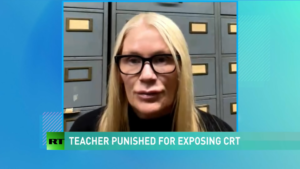 A middle school English teacher in Providence, Rhode Island has warned that critical race theory, which teaches children they should feel guilty for being white, is “absolutely everywhere” in schools in the area and that it is causing “great harm and racial divide and hostility between children.”

Ramona Bessinger described to RT host Steve Malzberg how she has been barred from giving classes for speaking out against her school district’s “radicalized” CRT “culture”, noting that there used to be “lots of diversity [and] lots of multicultural materials” in the curriculum, but now its essentially all CRT.

“It really has to stop,” she urged, adding “It’s in the plot narratives; it’s in the characterization; it’s in the imagery, it’s in the art projects, the history class, the English classes.”

“It is in the language that we are told to use in our professional development,” the teacher further warned, adding. “It is absolutely everywhere.”

“Just to speak to the fact that our libraries are being dismantled and books are being moved into archaic basement rooms around the school or flat-out thrown out,” Bessinger emphasized, adding “there’s a whole shift taking place and we really need to pay attention to this.”

She ominously added, “I don’t believe we’re going to recognize our country if this is allowed to take place because the culture is changing from within our schools and it’s changing rapidly.”

“Once they turn children against you and kids start believing this narrative that you are somehow racist, then it’s over,” she further warned.

Leftists are adamant that CRT is not being taught in schools, as the following video highlights. However, as Ramona Bessinger points out, it doesn’t have to officially be on the curriculum to exist in schools.

We humbly present for your enjoyment: "The Critical Race Can Can" pic.twitter.com/2s0cJANgof

Parents nationwide are under attack for speaking out against CRT in schools, with the latest example coming in Loudoun County again, where a member of the Board of Supervisors labeled concerned mothers and fathers as ‘alt right’, despite many being either black or Jewish.

2021-11-15
Previous Post: Damage Control: NBC Says Americans Should Stop Complaining About Inflation Because They Can Easily Pay More
Next Post: Aaron Rogers Refuses to Wear a Mask and NFL Forces Him to Give Post-Game Press Conference on Zoom – Despite Him Having Antibodies From Recent COVID Infection