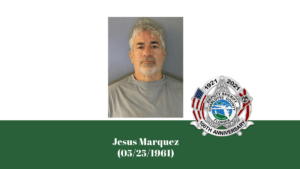 At approximately 9:15pm, the Charlotte County Sheriff’s Office received a call advising of a reckless driver who was possibly impaired. The caller relayed the vehicle’s location to deputies, who responded to the area and discovered the black BMW in question. They observed the vehicle struggling to maintain lanes and randomly speeding up and slowing down.

When deputies activated their emergency lights to conduct a stop on the vehicle, it continued for several seconds before finally applying its brakes and swerving in its lane before coming to a complete stop. As deputies spoke with the driver, identified as Jesus Marquez (5/25/61), they observed his eyes to be bloodshot and watery and his speech slurred and mumbled.

Deputies then asked Marquez if he’d had any alcoholic beverages that evening. Marquez replied that he had been drinking, and stated “too many” before stating he was drunk. Throughout the conversation, Marquez could not maintain his balance and rested on the vehicle for stability. At this time, he was asked to complete field sobriety exercises.

Jesus performed poorly on all FSE’s, and during the “Walk and Turn” exercise, he began to dance in place and then dance up and down the line he was asked to walk.

Jesus was placed under arrest for Driving Under the Influence and transported to the Charlotte County Jail. While en route to the jail, he vomited in the patrol car and on himself. Upon arrival, he became belligerent and refused to provide a breath sample.

2021-11-23
Previous Post: The Woodlands of Venice has caused a stagnant, mosquito breeding swamp on county property
Next Post: Enchant Christmas opening with new daylight hours this week in St. Pete