Sarasota Police save a jet skier and dog, after they abandoned their sinking ship 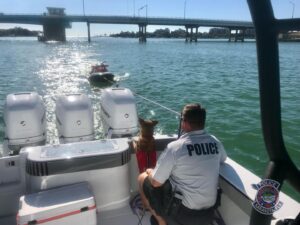 Sarasota Police save a jet skier and dog, after they abandoned their sinking ship

TALK ABOUT A RUFF DAY

On Wednesday, our Marine Patrol (who we may re-name Marine PawTrol

) was coming into New Pass when they saw someone swimming in the channel which is out of the norm. Rut-Roh.

Turns out a jet skier and his puppy passenger had to abandon their sinking ship and try swim to shore.

Our Marine PawTrol officers found the owner swimming with his pup on top of his head. Our officers scooped the two up and got them to safety.

Let’s raise the woof for our Marine PawTrol officers being in the right place at the right time.

2021-11-04
Previous Post: Venice closes a portion of the jetty walkout due to heave damage from last weekends surf
Next Post: Thunder By The Bay announces 2022 return to the Suncoast