Damage Control: NBC Says Americans Should Stop Complaining About Inflation Because They Can Easily Pay More 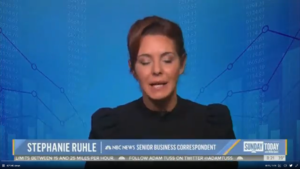 Damage Control: NBC Says Americans Should Stop Complaining About Inflation Because They Can Easily Pay More

NBC anchor Stephanie Ruhle said Americans should stop complaining about inflation because they are able to afford to pay more for food and fuel to heat homes if necessary.

Ruhle told Sunday Today host Willie Geist that skyrocketing inflation under Biden shouldn’t be a problem because the American people had the opportunity to save money during the COVID pandemic.

“And the dirty little secret here, Willie, while nobody likes to pay more, on average we have the money to do so,” Ruhle claimed.

Inflation airhead: NBC's Stephanie Ruhle says the "dirty little secret" of people complaining about paying higher prices for food and fuel for their homes is they can afford it just fine. According to her, people should have been saving during the pandemic and stocks look good. pic.twitter.com/RQ90focIXJ

“Household savings hit a record high over the pandemic. We didn’t have anywhere to go out and spend. And as we said a moment ago, we’re expecting retail sales this holiday season to break records.”

“While the stock market isn’t the economy, you have over half of American households with some investment in the markets and they hit market highs,” she added.

Ruhle also claimed the rising inflation is actually due to consumer demand “pushing up pricing.”

“So, we need to put all of this in perspective. This time last year when you and I were talking nobody had a vaccine. Now 200 million Americans do, and we’re seeing this push of demand and that’s pushing up pricing,” she insisted.

COVID-driven inflation by the Federal Reserve has resulted in prices of everything from food to fuel skyrocketing across the board with no signs of slowing, which now has Democrats extremely worried about the 2022 midterms.

That’s why the Biden administration and the media have been running cover for the inflation in recent months, first ignoring it completely, to NBC even claiming in a now-altered op-ed that inflation hurting Americans is actually a “good thing.”

While admitting that energy costs for Americans would be higher in 2022, Biden’s Energy Secretary Jennifer Granholm confessed last week that she had no idea when energy prices could start coming down.