Controversial BLM activist claims ‘riots are the voice of the unheard’ 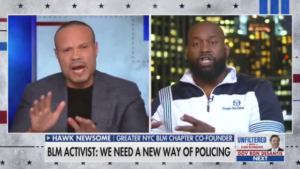 Controversial BLM activist claims ‘riots are the voice of the unheard’

A Black Lives Matter activist ended up walking out of an interview on Fox News on Saturday night after refusing to answer questions about rioting and vandalism linked to his group, and his promise of more riots in New York City if the incoming mayor doesn’t cooperate.

Hawk Newsome, who is co-founder of BLM in New York City, was asked by host Dan Bongino for his stance on violence linked to the group’s protests in recent years and a threat he made earlier in the week as he claimed new policing plans for New York City by incoming Mayor Eric Adam would trigger ‘riots and bloodshed’ in the streets.

‘Do you condemn rioting and burning down buildings?’ Bongino asked during the interview.

‘No. What I’ll say is, I understand when a police officer unjustifiably kills someone, why people lash out. I understand that completely,’ Newsome said. ‘I’m not going to condemn, nor am I going to condone it.’