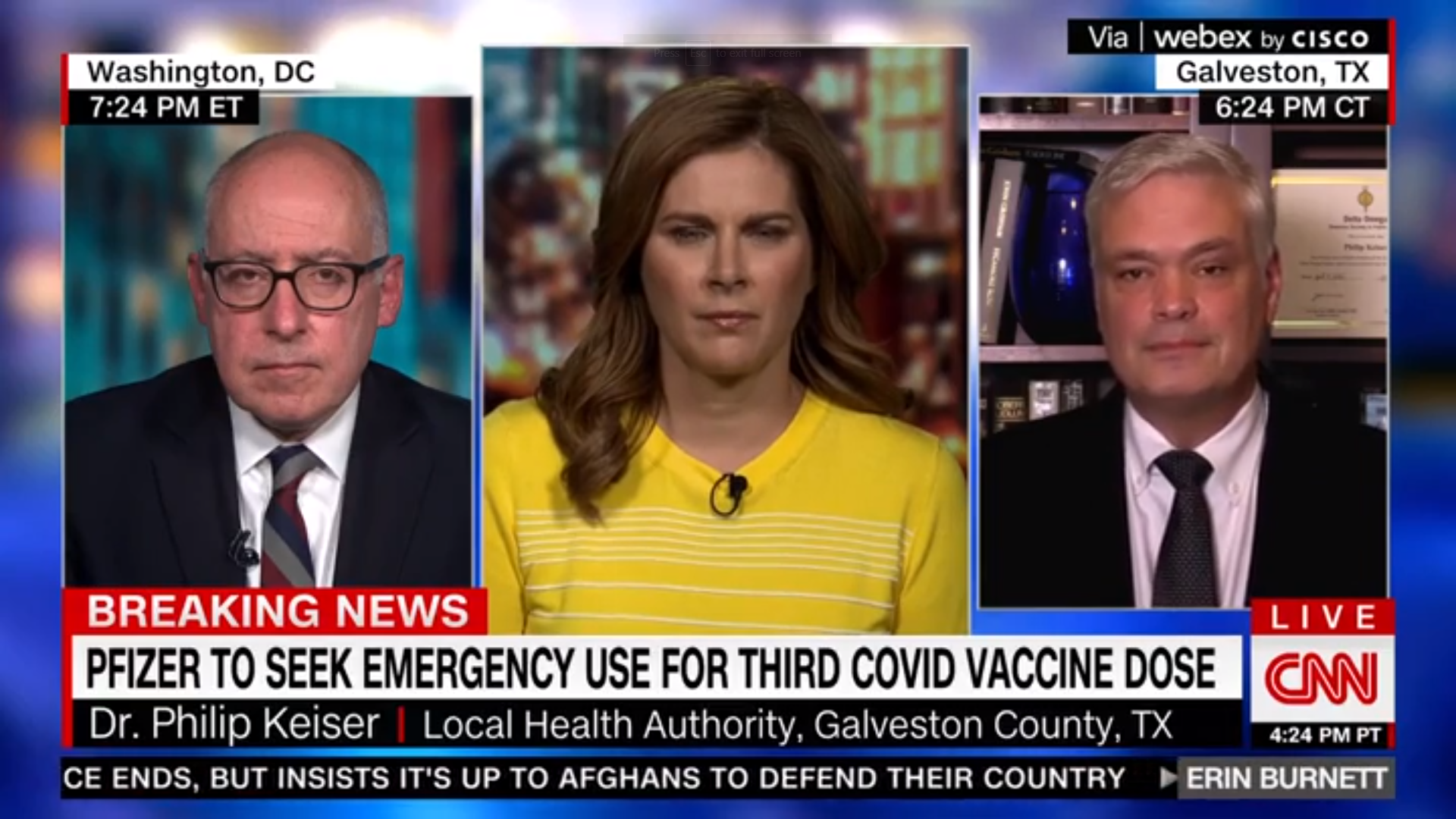 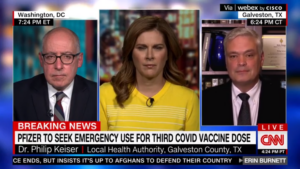 CNN ran a broadcast Thursday with its own medical analyst Dr. Jonathan Reiner declaring that it is “time to start mandating” coronavirus vaccines for all Americans to counter people opting not to take the shots.

CNN host Erin Burnett said to Reiner “when you look at this in the broader context, there’s still a third of the eligible population in the United States that hasn’t got a single dose.”

“Given where things are going, is it time to move on from saying please to mandating?” Burnett asked.

Reiner replied “I do think it’s time to start mandating vaccines. And I think that the private industry and private organizations will do that.”

“At GW university, where I work, starting in fall, you can’t be on campus unless you’re fully vaccinated,” Reiner added.

He continued, “We’re at the part of the pandemic now where the problem in this country is that 150 million Americans are not vaccinated. Half of that number is less than 18 years of age. But let’s look at the adults. Seventy-five-million adults have chosen not to get vaccinated. That choice has consequences.”

Reiner noted that the government cannot physically force vaccinations on people (for now), but advocated making it basically impossible for those who choose not to take it to live their lives normally.

“Now, we can’t force you to take a jab in the arm,” Reiner said, adding “But there are many jobs, perhaps, that can prevent you from working if you decide not to get vaccinated. So I think we need to be more proactive, and we will see industry take the lead in this.”

Earlier in the day, CNN hosted Health and Human Services Secretary Xavier Becerra, who said that “it is absolutely the government’s business” to know if Americans have been vaccinated.

In a telling statement, Becerra said “We want to give people the sense that they have the freedom to choose, but we hope they choose to live.”

HHS Secretary Xavier Becerra: "It is absolutely the government's business" to know who has and who has not been vaccinated. pic.twitter.com/Kukod1zIUO

Meanwhile, over at MSNBC they took things a step further with anchor Chris Hayes declaring that everyone who has skepticism about the efficacy of vaccines and opts not to take them are “cowardly.”

Hayes blamed the ‘right wing media’, proclaiming “You saw some of it there, people of the most conservative parts of the country turning against the vaccine. The leaders of this movement are cowardly. They refuse to have the courage of their convictions. They will not come out and say they are against the vaccine. Instead, they take this straw-man stance saying they’re just against anyone trying to promote the vaccine or heaven forbid mandate it.”

He continued, “So on the ‘Fox & Friends’ and others on the right say they don’t want anybody try to convince them to take the shot. They don’t want it mandated. They just want it out there. What they’re saying is you don’t want people to get the vaccine. Come out and say it, but they won’t say it. Because that means you want people to die. Those are the options right now.”

Tucker Carlson, whom MSNBC’s Hayes also targeted in his rant, said Thursday that the Biden administration is “no longer pro-choice” when it comes to vaccines.

“It’s so obviously unnecessary that it’s vindictive, and it makes you wonder, what is this really about?” Carlson said, adding “Medical privacy, physical autonomy, the right to control the medicines you take. These are the pillars of medical ethics, officially, or were. They no longer are.”

The host further noted, “They’re telling you that you’ll wind up in a government database if you don’t comply, and that government agents could be showing up and knocking on your door. What is happening? What is this about?”

White House Press Secretary Jen Psaki, who declared earlier this week that the Biden administration is to send “strike forces” to people’s homes to ensure children get vaccinated, decreed Thursday that criticism of the plan is a “disservice to the country.”

In regards to community-based vaccination programs, Press Secretary Psaki says "when people are critical of these tactics, it's really a disservice to the country." pic.twitter.com/gmzP0c8Si7

2021-07-09
Previous Post: Millions Of Low Paying “Jobs” Are Available, But Most Americans Can’t Afford To Take Them
Next Post: Latest update on the flooding situation in North Port